When VMware announced vSphere 5 they mentioned a new storage appliance called VSA or vSphere Storage Appliance (VSA).  It is intended to be used by smaller VMware environments who don’t/didn’t have a SAN or NAS array at their disposal. You know, because SAN’s are expensive, complex and such. Prior to this you could still deploy vSphere but you were heavily limited on the things that made vSphere so cool; vMotion, and HA for example.

That Sounds Nifty, how does that work?

It simply makes use of your server’s internal hard drives as a pooled shared resourced, pretty simple really.

Here is some more detail. For every ESXi server you will have a VSA deployed to it as a virtual machine. Making use of the available of the local disk (those hard drives that came with your server) on the ESXi host and it will pool these together and provide a replicated NFS volume for the ESXi server.  Once you do this on several hosts, then you should have a highly resilient storage backup system, since it will replicate these across all of the hosts providing a clustered and shared data store across all of your hosts.  Make sense? 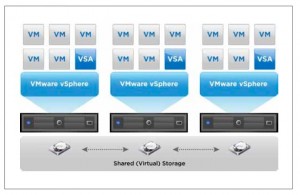 So does this mean you can kick EMC and NetApp to the curb?

Sorry not yet, keep writing those big checks but it will help in a variety of different scenarios.

Any remote location or branch office where you used to put a small SAN is a perfect example. Just simply beef up the hard drives on your servers and use those hosts as pooled storage.

Lab Environments are literately perfect for this. Now instead of waiting for some ancient hardware to come your way or beg management for a little money you can have a fully functioning SAN in your environment.

Very Small environments work great too, but just know this isn’t a permanent solution as of yet and wouldn’t replace a fully robust storage platform.

This isn’t really a new idea, virtual iSCSI appliances have been around awhile and network RAID isn’t new either, LeftHand. But what it is doing is removing external needs for a VMware environment. By taking away the need for a 3rd party storage device it shortens the deployment time for your virtual environment. I highly doubt that this is the last involvement that VMware will have with storage and see them providing much more significant tools for managing your virtual information.  More to come.

For a Technical indepth view, take a look at this link.

The views expressed anywhere on this site are strictly mine and not the opinions and views of my employer, partners, or any manufacturer.